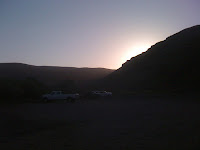 It’s early morning - probably around 6:20a.m. or so. I’ve made good time zipping over the landscape west of Condon and now am descending into the canyon.  This particular morning I pull off into the parking area for the Cottonwood Recreational area. Sometimes I stop at Cottonwood to use their “facilities.”  Today, instead of driving over the John Day, I choose to stop.

The sun is peaking over the mountains, bathing some areas in light while the rest remains shadowed.  Several trucks and trailers are parked, presumably having taken their craft down the river for fishing or kayaking. 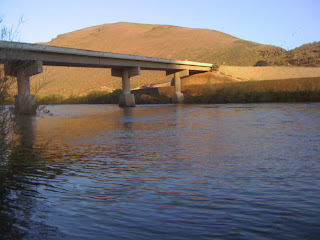 My shoes crunch on the gravel and the cool morning wind tries to rearrange my cropped hair.  I stop.  I hear the soft sound of the moving waters of the river and the occasional screeching of a bird of pray.  I breathe.  A moment of peace before I continue my journey.

I resume my trek towards the bank.  There is a break in the rushes where I can meet the edge of the water.  It lazily laps over stones and mud, tentatively greeting me on this new day.

I wonder where this water comes from - which mountain has released some of its snow pack to join the river.  I try to peak downstream but the curve of the river and the tall growth prevent me from seeing white waters. I wish I had a canoe right now, to follow the icy snow melt wherever it goes. 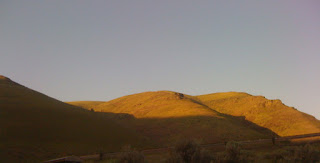 One more breath.  Two.  I trudge back to the car, smiling.  I could have a morning commute taking nearly as much time, inching down I5 with thousands of others in Portland.  But I was called to serve as a chaplain in the Columbia Gorge while Tim was called to serve the church in Condon.  In exchange for being open our own calls to ministry by the One, I get an amazing morning commute over a breathtaking and life-


giving landscape.  At least that’s how I make sense of it.

Climbing out of the canyon, moving further away from the John Day, I sense that with each mile traversed back and forth, I grow closer in my communion with G-d.  Praise be.