Where Are We Again? 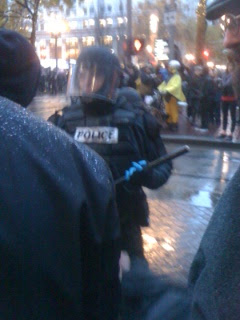 I hadn't intended on doing it.  I was tired - day four of a five-day week that was going to end in a 24 hour shift.  I wanted to be home.  It was cold and rainy; I was in Portland.  I got off of the #8 bus and looked down the street.  #N17.  Occupy the Banks.  The chants of the crowd down the street acted on me like a siren.  Toting all my junk on my shoulder, I walked towards the protest with curiosity, expectation and some fear.

With each step I saw them.  On horses, on bicycles, on motorcycles, in SUV's, on foot.  Cops in riot gear.  Cops fitted for violent response every where I turned.  I walked as far as I could.  The police stood shoulder-to-shoulder, batons in hand, zip cuffs on their belt, blocking the street.  This was real.  This wasn't some distant news report, but right in front of me.  I questioned my decision to investigate.

So many cops in riot gear.  They were everywhere.  And here I was, much like the 81-year-old man in town that had his head slammed on the ground last week,  just wanting to observe.    Was I going to get accosted as well?    The scene was chilling and more than sobering.  It was out and out frightening.  What country am I in again?

I wound up standing behind the "front line" of protesters facing the police.  The protesters chatted happily amongst themselves - not about hatred or violence - but about the Constitution and American History.  "You know nowadays, the Founding Fathers would be classified as terrorists for what they did to the tea."  "Do you know the exact wording of the First Amendment?  It goes . . ."  I understood that in part their conversation was supposed to be overheard by the police officers in front of them.  Hey, friend.  You are one of us, really.  We are all Americans.  One young fellow tried to start the chant, "You're sexy.  You're cute.  Take off your riot suit," but he couldn't quite pull it off and dissolved into giggles. 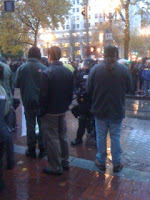 When I turned around to head back to my bus stop, I saw a young man with a homemade sign.  He was a little taller than me with wire-rimmed glasses, a long reddish beard, and a few extra pounds.  "Bookish" came to mind.  His sign had a message of social justice.  I can't remember the words exactly, but I remember thinking, "Yeah, we should actually live the Gospel.  What an idea."  I told him that I liked his sign and unexpectedly, he asked me where I worked.  "I'm a chaplain at the VA."  Then this young man's face lit up.  "I am studying to be a spiritual director."  I told him about the Chaplains Guild for Occupy Portland, and gave him a "cool to meet you."  He wasn't a "dirty hippie" that should "get a job," but a person of faith trying to make a difference.

Some people refuse to get it.  They are frightened by what they don't know, by change, by what they perceive might threaten their status quo.  Consequently, they vilify the Occupy protesters without hearing the overarching narrative:  The scales are lopsided and there is suffering.  No more. Many have suffered from our social/political policies in the last 30 years, and shame on us for just now taking to the streets.  No more.

Seems simple enough to me.

Only 43% of these protesters are 25 or under.  The other 57% are older with a good 12% eligible for an AARP card.  They are from all walks of life, beliefs, and ideologies.  And yes, there are some who are "high" or looking for confrontation.  But this hodgepodge of people understand something that most people in the pews don't grasp or refuse to grasp.  Justice happens when all of God's people are cared for, not just "me."  Capitalism is not Christianity.  Justice happens when we actually follow the lessons of the prophets and Christ and are willing to stick our necks out a bit.  Most of the protesters don't have a clue on how to fix what is wrong, but they are no longer willing to sit back and be silent.  They are boldly naming the ills - prophets in their own rights.  And much like the Biblical prophets, some are paying a heavy price for their efforts.

I hiked back up the street to wait for my bus.  I could have grabbed a bus as I walked but a line of police on horses blocked my way, so I walked all the way back to where I started.  As I stood in the rain and cold there was sudden movement.  State troopers marched up the sidewalk eerily reminding me of some bad movie about a lawless future America.  They boarded specially equipped SUV's so 10 or so rode on running boards.  The mounted police moved out.  What was going on?


I realized later that I had apparently just missed being in that place and at that moment of the pepper spraying.  Pepper spray against loud but peaceful protesters who up to this point have not broken one window.  Not in New York  Not in Chicago.  Not in Portland.  Where are we again?

Posted by Maggie Sebastian at 3:15 PM