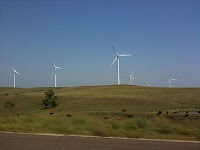 From my own historical readings, I know that Kansas raises some corn, a lot of cattle, maize, and a few other things. Until yesterday,  I forgot that Kansas also raises electricity at its wind farms.

We passed by the largest wind farm in Kansas just outside of Salina on our #PDXbound trek.  Turbine after turbine on top of small rolling hills for miles.  Facing not in uniform direction, some of the turbines looked as if they were grouped in conversation. Massive, we could see them for miles before we were actually near.

We did not have much wind yesterday (thankfully for our traveling in overloaded vehicles), so the blades turned lazily in whatever drafts exist that far off the ground.  I couldn't stop thinking that it looked like a giant child had planted a cluster of pinwheels in the sand and had run off to tell Mommy or Daddy of their great work.  (read "The Food of the Gods and How it Came to Earth," by H. G. Wells)


For years while in West Virginia, I had watched as one at a time these huge blades were transported west on I70 on elongated tractor trailer trucks. One at a time, "Oversided Load" posted on their bumpers, westward ho went the turbine blades.  I marveled at their size and wondered at engineers who designed and contractors who built such big machines.

Now I know where the blades went.  Over 150 wind turbines (of two makes) sprinkle 25,000 acres here in the middle of Kansas, providing lots of electricity. (I don't understand electrical units.)  The Smoky Hills project allows the landowners to collect royalties, the utility companies to collect payments for electricity provided, and for us to gain a little less dependence on fossil fuels.

When Tim connected our electricity for the apartment in Portland, he had a choice of paying a tiny bit more to make sure our electricity comes - as much as possible -  from wind farms such as these.  As I gaped in awe driving past these elegant, giant pinwheels, I thanked God for wind.  I gave thanks for the very breath of God that blows over creation giving us all that we need.
Posted by Maggie Sebastian at 5:59 AM