We left Hays, Kansas yesterday knowing that we did not have as long of drive as our two previous days - only 350 miles or so to Isaac’s as opposed to 550.  In exploring sight-seeing possibilities, Tim found some geological formations that I thought would be worth visiting.

Not too far west on I 70 was the exit to see Castle Rock.  Once at the bottom of the ramp, the sign indicated that Castle Rock Road went in both directions.  Very helpful.  Wave and Google Maps were also less than helpful being totally stumped by Tim’s entry.  In our confusion and misdirections, we confirmed that we can argue under any circumstance, including being in two different vehicles talking over bluetooth.

Eventually we found a tourist sign stating that Castle Rock was 15 miles south of the town but failed to mention that most of that was on dirt roads.  You’d think that on such flat ground a “stand-alone” geological feature would be easy to find. Not so much. Eventually we could spot, in the far distance, something rising from the flatness. 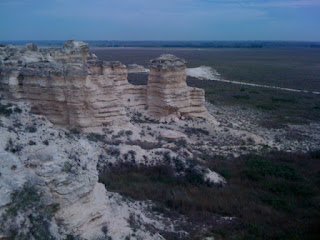 Last night, in reviewing information on the internet, I am not sure that we saw the specific feature called Castle Rock.  We were at the geological site, but I don’t think we viewed that exact formation. Without clear directions, we drove on a rutted path up the elevation and stopped when there was a place to pull over.

It was so very quite.  No road sounds, no air traffic, no human noise in any way.  Much to the nervousness of my husband, who knows my propensity for falling, sliding, and bumping, I carefully worked my way down to a ledge in the midst of the chalky remnants of a prehistoric age.

These striated cliffs and pillars are the reminders of a time when Kansas was part of the sea. 80 million years ago in the Cretaceous Period Kansas seas held plesiosaurs and a host of other life. Water and later wind worked together to make these formations.  The wind continues its work. Castle Rock itself had several feet of its original spire broken in a storm ten years ago.

I sat on my outcropping - closed my eyes and allowed the sun to warm my face.  The strong breeze cooled me even as the day heated to the 90’s.  So quite.  So lovely.  The details.  The fossilized  shell and tiny creatures strewn all around.  Nooks and crannies hollowed out by badland winds.  Another time and yet our time.  Here for our awe - to realize how amazingly complex and long our Creator has been creating, is still creating. 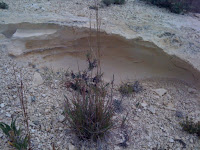 Ancient sea and centuries of wind.  Sculptures of the most exquisite sort, holy and sacred.

Getting off the top of this thing was something of a Laurel and Hardy move.  We realized that the ruts were getting too deep for our XB and Corolla so we had to back down the road with only our mirrors in our over-loaded vehicles.  Once the ruts were not so deep we did snappy 3-point turns and headed back, calmer than we came. Richer for our experience.
Posted by Maggie Sebastian at 11:02 AM