PD Tiffany and the Oregon Trail

Pardon Dexter Tiffany embarked on the Oregon/California Trail in 1849, leaving his sons Dexter Pardon and John Kerr with their pregnant mother, Hester Kerr Tiffany in St. Louis.  P.D. wrote to his wife every day while making his way across Missouri to officially join the wagon train in Kansas City.  His wife wrote to him with almost as much frequency.  Once on the trail, P.D. kept small diaries and sent them to her.

I know all this because I transcribed those letters and journals for my thesis project for my M.A. in History from Southeast Missouri State University while I was working at the Missouri Historical Society (Missouri History Museum), the owner of the manuscripts.

Somehow or other, with all the preparations for this journey over the last year, I never put together that we would be following the Oregon Trail for part of our drive.  Suddenly, yesterday, in the middle of Wyoming, I so longed to have my transcription at my fingertips - to compare place names, to remember the details of P.D.'s journey.  In our letting go, I let go of my copy and sent it to MHS - I think. 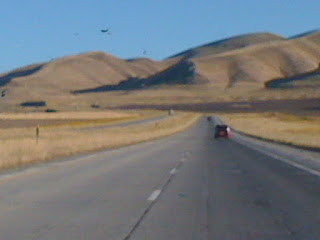 P.D. Tiffany was a land speculator in St. Louis alongside other St. Louis founding families such as the Chouteaus, Lacledes, and others.  He bought up the land which his sons later developed and is currently known as the Tiffany neighborhood in St. Louis.  He is not as well known because he had te stigma of committing suicide in 1861 - another story and analysis.

But in 1849, with cholera making its way up the Mississippi River, P.D. left his family and headed west.  Oh, P.D. must have been a sight.  The dandy originally from New England, riding his horse wildly after buffalo with his hat and gun flying!  His correspondence to his wife was handed off to strangers going in the opposite direction and somehow made their way to Hester's hands.  Amazing.

After getting ill along the pass in Utah, Mormons retrieved P.D. and nursed him back to health near the Salt Lake.  He wasn't very impressed with them overall, but he wasn't impressed with Germans, Indians, and a host of other folks either.

When P.D. arrived in San Francisco, he quickly went to Sacramento and began his land deals.  Buy in the morning and sell at double the price in the afternoon.  Unfortunately, P.D. put all of his money in worthless bonds so that when he returned to St. Louis, he was no better off financially.

Yesterday, as I looked at the rugged terrain, I thought of P.D. and all the others who made their way from Kansas City to Salt Lake, California, and Oregon.  What took them a whole summer is taking us about six days.  We will have a week's worth of blogs reflecting on our journey.  P.D. and Hester left behind stacks of letters and journals detailing their daily life, their joys, disappointments and fears.  I know the terrain has changed much from weather and human intervention, but still Tiffany describes the same amazing mountains that I am looking at now.

I know from an internet search that someone else has since transcribed the journals - they are probably electronic where mine were typed - painfully - with a baby in my lap.  (Trying not to feel all possessive and depressed that my work might have been for naught.)


Posted by Maggie Sebastian at 7:19 AM