My husband exclaimed the other day, "We live in a magical land."

Clouds lay thick over the tops of the hills obscuring the ridges as if an image has blurred off the edge of a photo.  Sometimes the clouds hang lower and pour over Coyote Wall like water.  Bits of cloud hide in crevices and under cantilevered rocks.  The sun pokes through the cloud cover in early morning as if a celestial spot light is focused on shifting patches of Douglas firs, volcanic rock and green hills. 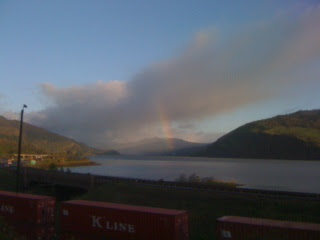 The Columbia River is quiet this morning.  Slowly drifting west, placidly, perfectly reflecting the terrain on its northern bank.  At certain times of the day the river seems to flow towards the east.  I guess that is due in part to the dam downstream.  And when the wind races down the Gorge between the mountains, el viento kicks up white caps and creates waves that smack the banks of the river as if it were an ocean.

That same wind constantly works on this place.  Trees grow leaning towards the east.  At higher elevations, along the trail, firs simply have no branches on their western side.  The wind works on the rocks and hills reminding us that our earth is in constant creation.

It has been a few minutes and I look up.  The sky has become blue.  Small bits of puffy clouds are scattered in the sky. The eastern sun shines brightly on the hill, leaving the face of Coyote Wall in darkness.  The river has picked up tempo.  And I've spotted my first eagle of the day.

Below us Bald Eagles like to gather on a small bit of land that juts into the river.  We've seen them, two or three at at time, sitting on the ground, surveying the river, knowing that this is their river, their land, their sky.  In the early evening, the eagles come out to play - or that's my impression.  The wind is often strong at that time of day and they swoop and ride the upper air currents.  I have watched with fascination as a single eagle will seem stationary, wings outstretched, working the wind to stay in one place.  We have counted up to eleven eagles at one time, dancing on the air, challenging each other with aerial feats, swooping just over our building displaying their magnificent wing span.

This is a magical place where rain and sunshine often share the same moment.  Everywhere we have lived, people have quipped, "If you don't like the weather, wait a minute and it will change."  But in this magic land with the massive Columbia forcing its way between staggering geological formations, sunshine is blocked by thick cloud cover in an instant, rain pounds the dirt, and just as quickly, the sun pushes through.  Rainbows, perfect rainbows touching each bank of the river, happen all the time.  Partial rainbows, bits of rainbow tucked in corners of the terrain - the covenant of God is renewed on an almost a daily basis and sometimes, multiple times in an afternoon. 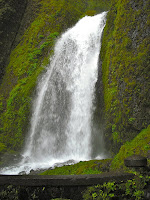 We did not plan to be here.  We planned to be living in the bustling city of Portland where weird is desirable and different is expected.  We did not plan to shift 60 miles to the east where waterfalls soar over the edges of cliffs with power and beauty and thunder.  We did not plan for magic - or at least this kind of magic.  We are blessed to live in an apartment where we can witness this magic daily, and daily our jaws drop and we praise God.

photos by Tim Graves
Posted by Maggie Sebastian at 8:50 AM