The Son of Man Has No Where to Lay His Head

It’s almost like we expect it.  To see them on the streets, sleeping near heating grates or under cardboard. It has gotten that common, that pervasive. Our cars speed down highways, as we barely catch glimpses of the tents or cobbled together shelters.  It’s so easy to turn our heads away from the hitchhikers and the rest.   We “know” who the homeless are. 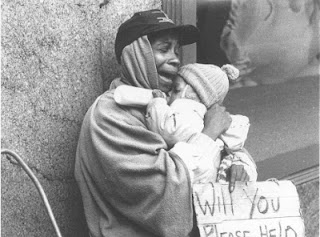 Dirty.
Unshaven.
Begging.
Mentally ill
or drunk
or on drugs
or all of the above.
Dirty.
Manipulators.
Glassy eyed.
Drop outs.
Lazy.
Dirty.

Since the financial crisis of 2008, there are more countries experiencing this phenomenon, this homelessness.  Nations with plenty - or at least more - who have citizens living on the streets, under bridges, in public squares, in peripheral vision. . . .

We in the United States have had homelessness for a long time.  Heck, we go way back.  During the Great Depression of the 1930s we called them hobos and they “road the rails.”  Then we just called them bums.  Now we politely say they are homeless, however, I would argue that through our actions and inactions we think of them as throw aways.  Throw Aways are people who have lost what they had or simply never had in the first place.  Throw Aways fight addiction and mental illness, but really, can you say what illness would befall you should you become homeless?  We spend a great deal of time coming up with theses and arguments to satisfy ourselves that homelessness is based on their own human error.  Blaming the poor for being poor.  What would happen if they all disappeared?  What if we literally threw them away?

How many homeless people do you know?  How many have you engaged in conversation? I hadn’t talked with homeless people much until recently.  There is no homogenous ethos to the homeless.  There is no single cause for any homeless person and no silver bullets to “fix” homelessness.  What I have learned in the last few months, is that homelessness comes in many packages - each unique and mysterious.  I don’t think I’ve found one yet that was worthy of being thrown away.

There is the kid who left the abusive home  - or maybe it was the loving home that he felt was smothering him.  Clueless about the world.  Frightened and looking for a meal.  How old are you?  Where are you from? He mumbles and says thanks for whatever he can get.  Should we throw him away? 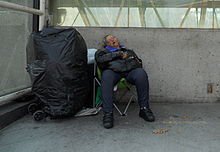 There is the Veteran who survived Viet Nam or Bosnia or Iraq.  His or her moral injuries are so deep that trying to “fit in” again, hold down a job, be around people is more than they can bear.  They have a few smarts that others don’t - after all we gave them survival training.  Their problems and needs may be a little different, but they too are hungry for food and for someone who cares.  Should we throw them away?

There are the sick.  Those ill with booze or meth.  Those suffering from schizophrenia or bi-polar or something else.  There are those who have festering sores, cancer, pneumonia, blind, lame. . .  Should we throw them away?

There was the 94 year old Latino man that some good citizen found and brought in from the elements.  He had followed the harvests, but now his hip was “not so good.” He was grateful for a meal and surprised by the offer to put him up for the night and give him a bus ticket to his family in another state.  He spoke like many 94 year old people I know, telling me how things used to be and how he missed the things that he once knew.  We spent a chunk of change on the old guy.  Perhaps we should have just thrown him away?

There was the 60-something woman who held a master’s degree in anthropology.  She said flat out that she “chose” to be homeless.  Never did get the whole story on that.  She explained her criteria for getting into a car with a stranger, how she dealt with cops who wanted to “move her on her way” and her other survival tricks.  She kept a journal and watched people.  She had much to teach me about human behavior if I could have stayed longer.  But maybe that was wrong thinking.  Maybe we should throw her away?

There was the Vet who struggled with booze.  He lost his family long ago between his nightmares, psychotic-like behaviors, and his “self medication.”  We drafted him to fight a war that most of us would not.  He did.  His upbringing taught him that service was honorable.   And while half hearted promises were made about low interest home loans and GI bills, we never thought about what to do with his damaged soul.  He is angry and sad.  We already threw him away once. 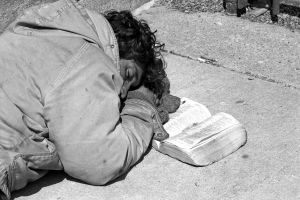 There was the Homeless Evangelist to the homeless.  She survived on “donations” of gas, food, and clothing. Even her jalopy was donated to her.  She kept almost nothing for herself, saying that she felt God called her to minister to the homeless wherever she could find them.  She survived on old bread and moldering brussels sprouts and the odd bag of Fritos.  She carried her greying hair braided and under a once stylish hat.  Her layered skirt and torn shirt offset her modest cross.  She just wanted to bring others to Jesus.  She was so concerned about “those poor homeless people,” never seeing her own situation in a similar light. Should we throw her away?

Young women and old men.  Those adapted to “this way of life” and those who survive only through grace.  And those who don’t survive. Families with children and children who pretend to be adults.  People who are fortunate enough to “couch surf” until one day they run out of couches with friends and family.  Every part of the country.  Every ethic group and original socio-economic group you want to name.  Every where.  Every where.  People who have no where to lay their head and nothing in their bellies.


I have no answers or solutions to the web of social ills of homelessness.  All I know is what these people teach me daily about love, grace, survival, forgiveness, and the fragility of humanity.  Their lessons are profound.  I can’t say I’ve met one yet that I would throw away.
Posted by Maggie Sebastian at 7:45 PM